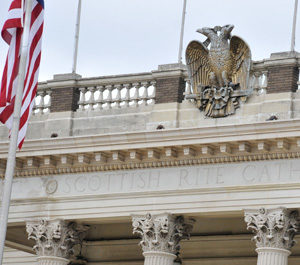 WHAT IS THE SCOTTISH RITE OF FREEMASONRY?

Freemasonry is the world's oldest and largest fraternity. It evolved in the British Isles during the 17th century and emerged as a formal organization in 1717 when the Premier Grand Lodge was formed in London. At that time, there were only two levels of membership or Degrees, teaching simple character-building lessons based upon the symbolism of stonemasons' tools. By 1730, the Third Degree was added in England, teaching further lessons of morality based on allegories surrounding King Solomon's Temple. As the Fraternity spread into Europe, and especially France, additional Degrees were added onto the basic foundation, each expanding on the earlier symbolism and offering further moral instruction.

By the 1760s, literally hundreds of Degrees, each typically a one-act play with the Candidate in a central role, had been created and were competing for Masons' time and energy. Some Degrees "grew up together" and provided a cohesive progression of symbolism with a central administration. Such systems of Degrees came to be known as Rites. For example, in the United States, the Royal Arch and Cryptic Degrees plus the Knights Templar Orders are known as the York Rite.

Stephen Morin of Bordeaux, France, emigrated to Jamaica in 1761 with authority to propagate the 25-Degree "Order of the Royal Secret," which contained its own Royal Arch, Cryptic, Templar, and other traditions. This system was spread throughout the United States, from New Orleans, Louisiana, to Albany, New York, by Deputies appointed by Morin. In 1801 in Charleston, South Carolina, the Order of the Royal Secret was transformed into the 33-Degree Ancient and Accepted Scottish Rite of Freemasonry.

The Scottish Rite has become today the largest and most widely practiced Masonic Rite in the world. Its Degrees teach a series of moral lessons culminating in the 32°, Master of the Royal Secret. The 33° is sparingly conferred on its members in recognition of their service to humanity or to Freemasonry. The Rite continues the tradition of Masons around the world in improving themselves and their communities. It is a tradition that brings pride to its members, and one we invite you to consider joining.

HOW TO JOIN THE SCOTTISH RITE

The petition is simple, basically requiring information about your Symbolic Lodge and how to contact you. Your petition is reviewed by a committee, which may visit with you to explain the Rite, and is presented to the membership at a meeting for a vote. After election, you will take the Scottish Rite Degrees at a "Reunion," usually held twice a year, but you should confirm all details with the Secretary of your local Scottish Rite Center.

If you are not a Master Mason, all you have to do is ask. In most states, members are not allowed to ask you to become a Mason; thus, you must do the asking. Just call the Lodge closest to you (check the "Yellow Pages" telephone directory, usually under "Fraternal Organizations"). Most Lodges meet in the early evening hours on a weekday, so try calling between 6:00 and 7:30 pm.

Freemasonry is a lifelong journey of fellowship, philanthropy, fraternity, and fun.

S. Brent Morris is Director of Membership Development for the Supreme Council, 33°, S.J., U.S.A. He retired from the federal government as a mathematician and has taught at Duke and Johns Hopkins Universities. He is Past Master of Patmos Lodge No. 70, Ellicott City, Maryland; a Fellow of the Philalethes Society; Editor of Heredom, the transactions of the Scottish Rite Research Society; and author of many scholarly articles and books on the Craft. Ill. Morris is the only full member in the United States of the world's premier Masonic Research Lodge, Quatuor Coronati Lodge No. 2076, founded in London in 1886. During the 1999 Biennial Session, Illustrious Morris received the Scottish Rite's highest honor, the Grand Cross.

Scroll Up Secured By miniOrange