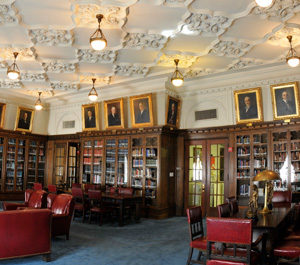 Open to the public Monday thru Friday by appointment only.

One of the crown jewels of the historic Scottish Rite Cathedral in Dallas is its library. Ever mindful of the fact that knowledge is the most effective weapon against ignorance, the foresighted leadership of the Scottish Rite Bodies has devoted both energy and resource in the creation and perpetuation of a library of commendable dimension, scope, and quality. The library contains over 6,000 volumes devoted to all aspects of Masonry.

We are proud to present the private library and research papers of the late Harry Carr of England, one of the most accomplished scholars the modern Masonic world has known.

The Harry Carr Collection consists of some 1000 volumes, many autographed by the author, and it includes a considerable number of other publications in pamphlet or brochure form. The categories include Lodge Histories, Constitutions, Old Charges, Catechisms, Exposures, Transactions, and Rare Modern and Antiquarian works. There is a complete set of Ars Quatuor Coronatorum, and an Oxford Bible in a beautiful old binding of full Morocco leather with gold tooling. A valuable portion of the library consists of a number of 18th century French exposures from which Brother Carr made the translation and study in preparation of his book, The Early French Exposures. Also, there are a number of first edition or pivitol Masonic classics, such as Prichard's Masonry dissected, Scott's Pocket Companion, Hutchinson's The Spirit of Masonry, Dermott's Ahiman Rezon, and Calcott's A Candid Disquisition. There is a copy of Tillotson's Select Orations, a series of sermons, the first of which is Masonic in context. This book is one of only two extant copies, the other being housed in the library of the Grand Lodge of Scotland.

Treasures of art adorn many areas of the Scottish Rite Library and Museum. Included is a rare Dickens mug, an original signed piece of ceramic ware depicting many of the characters of the Charles Dickens novels. Also included is an ornate gold candelabra with ornamental lights found in the Library, given by Ricardo 0. DeBlanco in 1953; and a lovely grandfather clock given by Linz Brothers Jewelers of Dallas.

This Neo-Classical Revival structure was designed by Hubbell and Greene Architects of Dallas in 1907. The front facade of the building contains a large portico with Corinthian columns. It was constructed for the Scottish Rite of Freemasonry in Dallas and the building has been their home since it was constructed. The corners and sides of the windows of the building feature limestone quoins and the area between the quoins is red brick. Red brick is also used to articulate the base and the portions of the parapet above the cornice. The building is located within the Harwood Street Historic District.